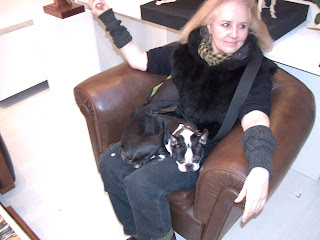 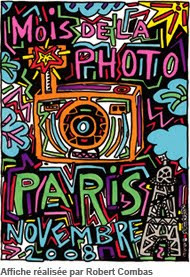 Often it is cheaper to drink wine or beer than coffee in Paris. I try to limit my purchases of G20 wine to under 6e or $8. Often when out in museum café or near touristic spot a coffee crème will cost 4,50 about $6 and it is usually not very good.. A caffee crème should cost no more than 3e about $4. In cheap restaurants a caraf of wine (a litre about a bottle) will probably cost about 10e or $14. Happy hour is always a good choice for half price beer. Oh and you can drink the tap water at home and it is good!
Today we went to the La Maison Europeenne de La Photographie ville de Paris. It is just around the corner from us and I have been meaning to go but when I received a message from the Meetup group Paris If You Please, http://www.meetup.com/Paris-If-You-Please/, about a trip there for next Friday, I decided that it was time to go visit. It was worth the visit. The show was a selection of their cutting edge permanent collection.
In a bit we will go to a vernissage in the Bastille, pick up our train tickets for Geneve at Gare de Lyon, then head fro Mirella Rosner’s show.

Later:
Arnaud Prinstet whose show we went to see at Dororthys gallery dorothysgallery@gmail.com struck me as kind of a jerk. I also did not think that his artwork was of any value. It was very difficult to converse with him and he wasn’t very friendly. His is the Meetup Paris-meetings-in-Artist-Studio. Dororthy is an American from the North East USA who has had this gallery in the Bastille for 4 years. I liked the gallery because there were several rooms including an outside space. I had a little r n r with her dog Kennedy. I was missing my dogs and he hadn’t received his normal walks because of the opening.
Mirella Rosner, on the other hand, is such a lovely person and I admire her art. We met several friends of hers at her show at the theatre and had a lovely conversation with them. The theatre area in the 13th arr was largely housing projects with North African inhabitants. The theatre was only two blocks from the Metro so we did not see a lot of the area. It was definitely not a tourist location.
Upon returning home we are eating dinner in true French style at 9:30 PM.
Posted by suzun hughes at 6:56 AM