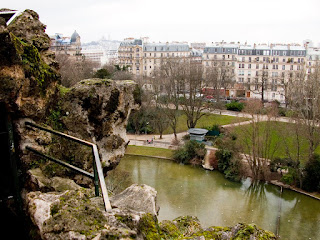 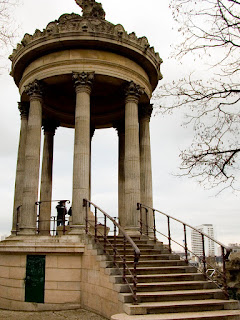 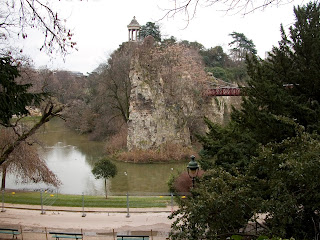 Went to the covered marché in the 19th called Marche Secrétan at 33 Avenue Secrétan. We took Metro line 7 in front of Cite and then changed to line 7 bis. Although my list said it was open all day, it was closed when we arrived.
Understandably, lots of shops close for a 2 hour lunch, so we walked around a bit and discovered the Lac et Parc des Buttes Chaumont, which was built in 1867. It was kind of a weird, and intriguing place. It is the largest, most hilly and least touristy park in Paris. We walked to the top of the hill, which overlooks the north of Paris with the Montmartre hill right in front of you. The park has a 'temple' which is reached via a suspension bridge. The neighborhood is a bit run down and so is the parc, but a nice surprise and views.
Walked back to the marché but there was only one vendor and not very nice produce, so we visited the shops along Avenue Secrétan. Had a stand up coffee in a café (it’s cheaper but I’m usually too tired to stand), visited a Vienna Pastry Shop, a butcher, an Italian deli, a vegetable grocer, and a hardware store where John bought an Italian espresso maker. John loved the one that Robin and Duncan used.
Posted by suzun hughes at 9:48 AM